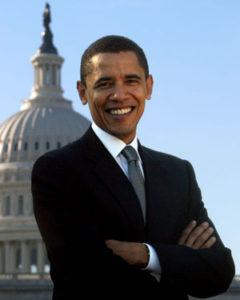 Well, I just can’t help it. I’m sitting here feeling pretty smug and full of myself.

According to yesterday’s release from the Associated Press, President Obama took my advice and now he’s going to be regularly posting his on tweets on Twitter. No ghostwriter tweets! No intern pretending to be him, but HIM. His original posts will be signed with an “O.B.” while other tweets from the White House will remain unsigned.

What a fabulous, funny coincidence! Because last week I posted a Tough Love Tuesday video telling you to not outsource your presence on social media… that YOU need to be the one to show up, share, engage and participate. This is the one job that you, as a creative entrepreneur, should not give away!

So, when I read this article, I giggled a little and thought, Hmm… could President Obama be watching my Tough Love Tuesday videos? Probably not. But he is getting some very good social media advice.

What President Obama’s Social Media Advisors Must Know…
And You Should Know, Too!

Whoever is advising President Obama knows:

People want the real thing, baby!
The social media crowd has no use for imposters. They want to interact with the real thing, with President Obama himself. Not his advisors, assistants and interns.

And as I said in last week’s Tough Love Tuesday video, your fans and clients don’t want to hear from your marketing manager or your agent or some social media expert. They aren’t interested in someone else’s answers, opinions, activities and perspective. They want to know what you think, what you prefer, what you spend your day doing, what choices you make and why, who you endorse, follow and admire.

When it comes to social media, who you are as a person is just as important as who you are as a professional. This means that you need to share more than links to business articles, other people’s quotes, or announcements about your next offer. You need to tweet about you… the person, not the brand.

This may sound like a silly waste of time to you, but it’s not. Why? Because it’s the beginning of a relationship. That person who eats oatmeal with bananas may not need your services right now… or ever. But chances are they will know someone who does. And they will be more likely to refer to someone they have a relationship with (you!), even if it’s a virtual relationship, than to someone they’ve heard of but don’t really know.

Let’s all follow President Obama and see if he tweets about more than policy, problems and bills submitted to Congress. Will he show up only as The President, or will he be person, too? A father, a husband, a friend, a son, a human being who eats, sleeps, works, reads, watches movies and TV? I hope so.

Because while people are looking for him to lead, they are also wanting him to be someone they can relate to, someone who isn’t so removed from the general public that he’s lost touch with what people need and want, what they deal with day in and day out.

President Obama attends a small but important dinner party. The conversation at the dinner table turns to the subject of health care. People are asking questions, voicing opinions, debating the options when the President stands up, excuses himself and signals the Secret Service to bring in his look-alike stand-in. The stand in takes the President’s place at the table and joins in the conversation as the President leaves the building.

Would this ever happen?

No, of course it wouldn’t. (By the way, if you’ve never seen the movie “Dave,” go rent it. It’s a wonderful, funny yet poignant film that involves a Presidential stand-in!) Just as the President wouldn’t hire a stand-in to talk for him at a dinner party, he’s not going to have someone else stand in for him on social media either. Because his smart social media advisors understand that social media is a conversation. It’s not a place to make speeches, pitches and announcements. It’s a very, very large dinner party where ideas are discussed, where questions are raised, where opinions are expressed (and formed), where jokes are told and gossip is shared.

To “do” social media right, you have to show up and be a part of the conversation. You have to listen and respond to what you hear. You’re not there just to share your own brilliance, ideas and insights. You are there to meet and get to know the people in the room.

This is why you, like President Obama, need to be representing yourself on social media. So, if someone asks you a question, challenges your stance, expresses their appreciation or their disdain, or gives you insight into the hearts and minds of your ideal client, you need to be the one who is paying attention and responding to that conversation. Not your stand-in social media person. Not your assistant. You.

While I’m sure President Obama has many, many people doing research and polls to find out what people in America are thinking, what they care about, dream about, approve of and detest, social media gives him yet another way to hear the voice of the people. Granted, only a small percentage of the US population uses social media, and only 1.1% use Twitter.**

But what can’t be denied is that social media, whether you participate or not, has an enormous influence on popular opinion, what’s hot and what’s not, what people believe and how business is done. It is also a primary source of information for traditional media, like news TV, news radio and newspaper reporters and editors.

So, while a small amount of people may be actively using social media, our entire population is being influenced by it. This is yet another good reason for President Obama to pay attention, show up and listen to what the social media crowd is talking about.

This is good advice for you as well. Show up on social media and listen to what your clients and fan are saying. What do they want? What do they worry about? What is their day like? How can you address those worries and concerns? How can you help them solve the problems and meet the challenges they face everyday?

When I first started using social media, I started by following colleagues, Internet marketing gurus and friends. But one of my mentors, Sandi Krakowski, woke me up to the fact that I needed to be following people who were my target market — creative solo entrepreneurs and artists who want to build their business and attract more clients online. By following them, I could find out what they are talking about, what they are complaining about, what bugs them, what delights them.

In other words, you can, too. Follow those you want to serve. They will tell you, if you’re listening, how you can best serve them.

(** I got this statistic from http://www.frogloop.com/care2blog/2011/5/28/a-social-media-reality-check.html , a blog that claims this statistic comes from April 2011 results from Experian Hitwise.)

President Obama Is Not Alone… and Neither Are You

While I’m overjoyed and delighted that President Obama listened to my Tough Love Tuesday video and has decided to personally post his own tweets, I’m sure he’ll have a lot of help doing so. I’m sure he has people to give him great advice about what to tweet. And he may even give his tweets to his PR person before hitting the return key. Most likely he’ll also be advised on when and if he should reply to someone else’s tweet or how to respond to questions he receives. After all, he is the President. And every little thing he does, says or tweets is sure to come under merciless scrutiny.

And while I wish all of our Presidents had more freedom to be a human being as well as our leaders, it’s a wise thing to get counsel and advice on how to use social media… whether you’re the President or a solo entrepreneur. We all need help when it comes to doing something new. And for many, the world of social media is a strange, new world with a foreign culture and a semi-secret language that can be confusing, intimidating and overwhelming… at first.

But by paying attention, taking it slowly, being genuine and getting some smart “how to get started” guidance, you will catch on in no time.

This week, I’m helping a client get started on Facebook. While I’ll be helping her with the mechanical stuff, like setting up a Business Page and updating her personal Profile, most of our time will be spent talking about social media “best practices” and strategy: how she can use social media to initiate and nurture relationships of trust, mutual interest and support, attract new, ideal clients, engage with potential joint venture partners and referral sources, listen to her ideal audience and build a community of loyal, enthusiastic fans.

I can do the same for you, if you’re ready to approach social media with a sound strategy that gets results, and you’re willing to show up, participate, interact and have fun building a community of fans online!

If you have questions about any form of social media, specifically Facebook and Twitter, if you need help getting started or creating a social media strategy that gets great results while letting you be you, please leave a comment here. I will reply, because after all, this IS a conversation. And I am listening!