On those days when I feel a little off or out of sorts… slightly grumpy, or dissatisfied, or really down and out… I ask myself, “How am I saying No to myself right now? What is it I want that I’m not letting myself have?”

Because I know from experience… this is what’s going on. There’s something I want. Something important. Something connected to my core. And I’m saying No to it… instead of saying “Yes. Absolutely.”

And I bet you… you’re doing the same thing. And you may not even be aware of it.

This video is all about recognizing and saying Yes to those soul desires that move you forward towards more of what you want. Those desires that ask you to step out of your status quo or even your self image in order to open up to a new dimension to who you are and who you could be.

Any time I’m feeling a little off, a little grumpy, irritable, anxious, or even completely down and out, I always ask myself, “How am I saying no to myself? What is it that I’m not letting myself have?” Because, more often than not, that’s exactly what’s going on.
I bet you dollars to donuts that’s what’s going for you, too. You may not even notice it because, it happens really, really quickly, but the next time you’re feeling a little bit off, or you’re just kind of irritable for no reason, or you’re kind of snappy or you’re feeling sad and just kind of out of it and you’re not sure why, it’s because somewhere inside of you, you’re saying no to you. You’re saying no to something that you really, really want, even though you might not be aware of it.
Now, I’m not talking about saying no to something like a piece of cheesecake or another cup of coffee. No, I am talking about a deeper soul desire – a creative desire, something that’s deep inside of you that wants to come bubbling up and out of you. To write that book, or maybe you have an urge to start painting again, or you want to go to the conference in video editing, or find true love, or start that business, or close one down.
These are the desires that are moving you forward, that are asking you to step outside of your status quo and maybe discover a whole new dimension of who you are. But they’re also the whimsical creative desires that hit you. Maybe you’d like to start painting again, or to just do something fun that you’ve never done before. To explore a new town. To explore a new possibility.
When I was young and growing up, my mother was great at saying no to my ideas. I would share something with her like, “You know what I really want to do when I grow up? I want to…” And she’d respond, “Oh, no. That’s a terrible idea, you don’t want to do that.” My problem is that sometimes I’ve still got my mother in my head saying no to my ideas.
But that’s not the big problem. The big problem is is that my mom is also inyourhead. I think she’s in your head, too, and she’s shooting down all of the desires that are coming up for you. We’ve got to get my mom out of your head!
Now, I hear what you’re saying. You’re saying, “But I can’t say yes to these things right now. I have things I have to do. I have a huge to-do list. I have responsibilities. I’m just barely my head above water.” I get it. Me, too. I understand. But here’s the deal: Just because you can’t act on those creative impulses and soul desires in this red-hot minute doesn’t mean you have to say no to them. You can still say yes.
Yes, I am going to write that book. Yes, I am going to take that painting class. Yes, I am going to move to Hawaii, have that relationship, learn to tango, take a class on video editing. Whatever it is, yes, I am going to do it. Because when you say yes, you open yourself up to the guidance, the possibilities and the crazy miracles that will not only take you there, but will hook you up to your own creative energy, your aliveness to all of who you are.
You extradite yourself from the land of lack and move into the paradise of everything is possible, and it’s possible for me.
See, the reason that you’re feeling off or irritable or grumpy or completely down and out is not so much because you’re not physically acting on the things that you want. It’s because somewhere inside of yourself, you have said no to you. The desire arises, the ideas come, and you shut them down almost instantly. You even feel guilty at some level for even wanting them. You tell yourself you’re just not the person that gets to have that, and you believe it.
The next time you feel and recognize one of those wild, creative desires coming up in you, or even a playful impulse of some kind, see if you can catch it and stop yourself before you trample it with a, “Yeah, no, that’s not gonna happen.”
Instead, give yourself a good five minutes to say yes to it, to be in it, to dream it out all the way, to give it a full-body yes. Then, take one little action. Check online and see if there’s a tango teacher in town. Write one sentence of that story that’s inside of you. Go on YouTube and watch a video about video editing if that’s what turns you on. Check the real estate listings in Hawaii. Just one tiny, little thing.
Say, “Yes, yes, yes. This is what I want. This is for me. I’m not sure how it’s gonna come about, but yes. All the way, yes.” The next time you feel yourself being grumpy and off and irritable and you’re not sure why, check in with yourself and ask, “What is it that I’m saying no to right now? What is it that I believe about myself and what’s possible for me that’s making me not so happy?”
See if you can dig out that no and replace it with a big, wide, yummy yes. When you do, you are going to come alive. You are going to be able to tap more into your creative energy and your creative genius than you ever thought possible, and you’re going to feel so much better. 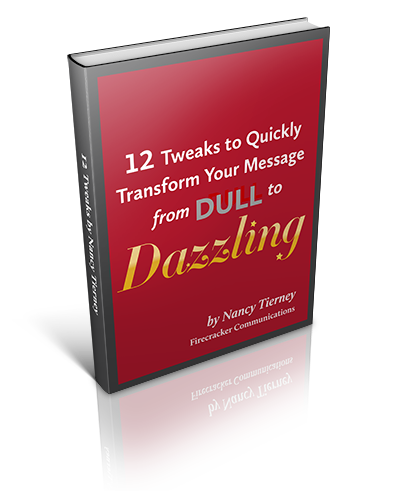 Free eBook: 12 Tweaks to Transform Your Message from Dull to Dazzling.

Way to go! I’m totally psyched that you’re going for the Love!